I'll be chatting with Todd Killian on his podcast "Christmas Clatter" coming up next week - Thursday, Nov 26 - American Thanksgiving! In the meantime, big thanks to Todd for reviewing my new Christmas album "Chrismtas Present".

“Christmas Present” gives us the warmth and timelessness that we love about great Christmas albums. McMaster’s vocals are soulful and the perfect modern sound for these Motown reimaginings. I highly recommend adding “Christmas Present” to your playlist.

CELEBRATING 60 YEARS OF A MOTOWN LEGEND 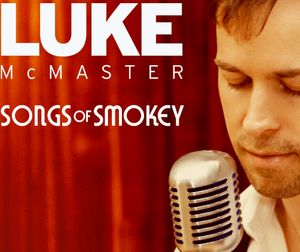 Well-known as a purveyor of blue-eyed soul, Luke McMaster sets the bar ever higher with each project he takes on. His latest album has the singer-songwriter delivering classics by a music icon who Bob Dylan deemed America's "greatest living poet" and who played a key role in transforming Motown into a pop music landmark. Songs of Smokey pays tribute to the artistry that made Smokey Robinson a soul legend - each song delivered with McMaster's signature style.

Set for release on February 7th by Green Hill Productions, Songs of Smokey features McMaster's reimagining of Robinson's most beloved Motown hits, from his percussive twist on "Ooo Baby Baby" to his soul-baring take on "Tears of a Clown." With its caressing vocals and acoustic backing, "The Way You Do the Things You Do" is transformed into a gentle love letter, while "Cruisin'" maintains its distinctive Smokey delivery through McMaster's silky falsetto...

Thank you to J.P Squire for covering the the show last night for the Kelowna Daily Courier!

Canadian singer-songwriter Luke McMaster is said to have mastered “the sound that has become one of the most significant musical accomplishments and stunning success stories of the 20th century.” His stunning R&B/soul concert at Creekside Theatre in Lake Country could have been labelled a tribute or nostalgia performance. It was anything but.

McMaster has recorded a succession of EPs and albums (2008’s Time EP, 2013’s All Roads, Heart of Soul from 2014 and 2016’s Trending) that contained both originals and sensual interpretations of such favourites as Stevie Wonder’s Signed, Sealed, Delivered (I’m Yours), Roberta Flack’s Feel Like Makin’ Love and the Bee Gees’ How Can You Mend a Broken Heart.

The final piece to the puzzle was his collaboration with Motown’s legendary Lamont Dozier, writer/producer of 54 No. 1 hits and Rascals’ founder Felix Cavaliere.

McMaster coming to the Okanagan

Really appreciate J.P. Squire's coverage of my upcoming dates in BC.

Excerpt from The Kelowna Daily Courier

It’s been said what is old is new again.

So it should come as no surprise that Luke McMaster has produced a new album called Icons of Soul, Vol 1, thanks to two R&B masters.

McMasters’ latest album is the result of his recent collaboration with Motown’s legendary Lamont Dozier, writer/producer of 54 no. 1 hits (Love Is Like A Heat Wave, I Can’t Help Myself (Sugar Pie, Honey Bunch) and You Can’t Hurry Love) and Rascals’ founder Felix Cavaliere (Good Lovin’, Groovin’ and People Got to Be Free). McMaster covered some of their classics and wrote new music with these Rock and Roll and Songwriters’ Hall of Fame inductees.

On Our Radar: Luke McMaster bringing new sounds of soul to Kamloops

Thanks to Brendan Kergin at the Kamloops Matter for covering my upcoming date at the Blue Grotto with Andrew Allen!  Here's the story:

Bringing a cross of Motown and modern pop, Luke McMaster is performing at the Blue Grotto next month.

The March 5 show will feature material from the singer/songwriter's latest project "Icons of Soul," during which McMaster wrote with a pair of Motown legends: Lamont Dozier (whose songwriting credits include "I Can't Help Myself (Sugar Pie, Honey Bunch)") and Felix Cavaliere of the Rascals (the guys who sang "Good Lovin'" among others).